Living in the Forest Villa Neighborhood in McLean

For 10 years, my husband, children and I lived in the Forest Villa neighborhood in McLean.  We absolutely loved the neighborhood and our neighbors.  It has a great history with some original owners and several newer owners.  Everyone looks out for everyone else, and it’s not uncommon for a book club night or an impromptu cookout among neighbors to pop up.  Some fond memories are during big snow storms or the perfect spring day which brings everyone out to shovel snow or ride bikes.  Lots of adorable pets get walked by their adoring owners.  Kids group up for an outdoor backyard playdate and adults relax together on their back patios or front porches.

The Forest Villa neighborhood in McLean, Virginia consists of 184 detached homes along 8 streets covering approximately one half square mile.  Downtown McLean is about 1.25 miles.  Public transportation includes a couple of bus stops close by at the corner of Linway Terrace and Old Dominion Drive.  Public Schools include Franklin Sherman Elementary, Longfellow Middle and McLean High.  There are also other private schools close by.

Notable past residents include President Johnson’s Press Secretary, George Christian.  Legend has it that Fairfax County plowed snow from Forest Villa first so Secretary Christian could get out quickly to the White House!  1518 Carlin Lane, which used to be a dirt road, was the site of the original farm house built in the 1930’s.  (Back in the day, the neighbor at the end of the street had a radio tower in his backyard.)  This one-acre property was redeveloped in 2012. 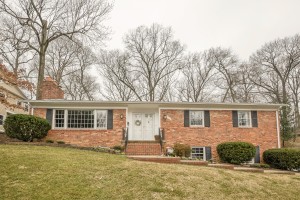 erage year built of homes in the Forest Villa neighborhood is 1971 and 17 homes have been built since 2005.  The average lot size is .46 acre.  The smallest house is 1032 SF above grade and the largest is 6366 SF above grade.  Sections of Brookhaven, the entrance to the neighborhood, were built after World War II.  These houses are traditional saltbox colonials, many of which have been renovated and expanded.  In the 1950’s and 1960’s builders erected a mixture of ramblers and splits and in the 1970’s and 1980’s more colonials went up.  Poplar Place was developed in 1987-88 and Highland Glen Place was built by Potomac Custom Homes in 1997-98.

Highlands Swim & Tennis Club is a short distance down a path behind the street.  There is trail access to Pimmit Run off of Forest Villa Lane and at the end of Brookhaven Drive.  The trails are great for dogs and taking nature hikes.  The neighborhood hosts its own Annual 4th of July parade and block party.  A paved path leads along Linway Terrace to Old Dominion Drive for easy access to town. 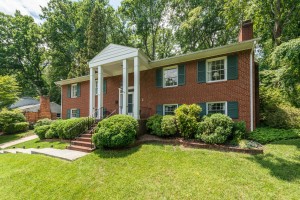 Lizzy Conroy is a Partner of HBC Group. She has served as a real estate professional since 2009 and has worked with hundreds of clients. Lizzy graduated from Georgetown University with a B.A. in Economics and has served in a number of professional capacities in the Washington, DC area âÂ€Â“ first with the international trade group of Hogan Lovells, then as a marketing manager with MicroStrategy of McLean, VA. She also held business development positions with Kalmia Construction, a Maryland-based commercial construction company, and Newmark Knight Frank, a commercial real estate firm.
Read Full Bio