WHEN YOU STUMBLE ACROSS A TREASURE TROVE OF BEAUTIFUL HISTORY, YOU SHOULD STOP AND SMELL THE FLOWERS AS THEY SAY. IF YOU EVER WONDERED WHAT CHESTERBROOK, MCLEAN MAY HAVE BEEN LIKE IN THE 1950’S, FRANK DA CRUZ’S BEAUTIFUL RECAP AND STORYTELLING WILL GIVE YOU A SMALL PEAK INSIDE THIS WINDOW IN HISTORY.

The story of Frank takes us to a time capsule near the corner of Kirby Road and Franklin Avenue, to an enclave of GI-Bill cinderblock cubes, a very small subdivision of homes for returning veterans in post war, 1950’s. Frank’s father had received a $7,000 GI Loan for their home. The small enclave of homes was surrounded by farmland. Kirby Road was a dirt road, and everything else was farms and forests, wildlife and creeks.

Frank knew a simple life, no TV or washing machine. And certainly no internet. His parents were in the Navy. His grandmother lived in Arlington. His dad used to walk to Old Dominion Drive to catch a bus for 10 cents to DC. His friend Harry Hill lived on the adjoining 40-Acre Hill Farm. He and the neighborhood boys spent their childhood all over the farms, outside. Frank went to Chesterbrook Elementary, but for some reason, it seems many fields away from our sprawling suburbia. 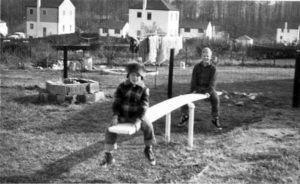 Caption: Frank da Cruz (rear) and his brother Dennis in 1955.

Frank’s memories of Chesterbrook and McLean are so well preserved, and yet nothing at all of what we know of the area today.

“When I was 10,” says Frank, “I got a bicycle and I thought I would ride it as far as I could ride. Well, I ended up at Bailey’s Crossroads. It was the cross of two roads. Nothing but farms in every direction. On one corner, there was a gas station combination diner run by a Ma and Pa with the Bond Bread screen door. That was all that was there.” 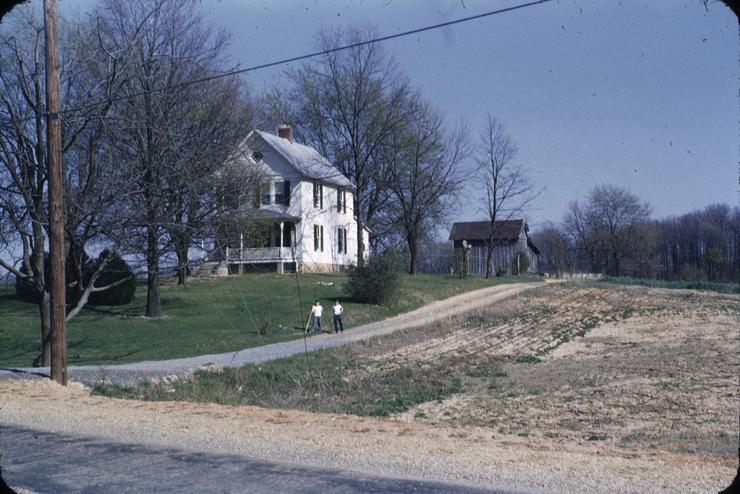 The Hill Farm, on the southwest corner of Kirby Road and Franklin Avenue. Circa 1950.
Photo courtesy of Frank da Cruz.

(Below is an excerpt from a recent call with Frank.)

Q: Frank, what was a Saturday like for you?

Running wild in the area with friends. Usually at the Hill Farm. There was a creek that ran behind the house, with a tire swing, and we’d climb trees. When they built subdivisions, they piled the trees in gigantic piles taller than a house, like 30 or 40 feet, and one time, my friends and I found this pile and climbed up on it and figured out how to slide down the interior. There were no rules then, no helmets.

Harry’s dad barely grew anything on their farm. Further up the road were working farms with cattle, we’d make faces at the cows and run away and get stuck on the barbed wire fence. One of the farmers, one of his favorite tricks was, he had an electric wire for the cows, and he would try and trick the boys to grab his hand while he held the wire and touch the ground. On the farms were outbuildings with all sorts of old junk and tools that went back 100 years.

The original recordings on phonograph that Thomas Edison invented, original wax cylinders, I found in one of the outbuildings. You would pick them up and they would crumble in your hand. Old tools that went back…ancient. Old plows, and the last time they were used they were left in the spot and rusted for 30 years. When we were kids, we lived with the constant warnings for stepping on rusty nails because of tetanus. We were always in the high grass, all sorts of things in it that you would step on. The thing I hated most, were old rusty barrel hoops that would pop up and hit you on the face.

Oh, another thing was the geese that would chase you. The geese chased us and would bite us on the shin. And they had these sharp teeth. And our feet, we would run, practically naked in the summer. Everyone was poor then, there was no store to buy clothes. We ran barefoot in our underpants, but the elastic in the underpants was held up with a clothespin. We got bee stings almost every single day. 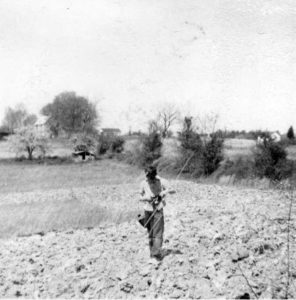 Frank says that the farms were like a walk through time. They dated from the end of the Civil War to 1900’s. Many had no running water in the homes, blown glass in the windows that looked wavy as you peered through, white painted farm buildings.

Frank can tell you what it was like on the first ever Opening Day of Chesterbrook Little League Baseball in 1956. The ceremony was a big deal, with the Air Force Band and the majorettes. A young Harmon Killebrew was there and signed Frank’s hat. Frank says in those days baseball hats were made to size, even the children’s hats. 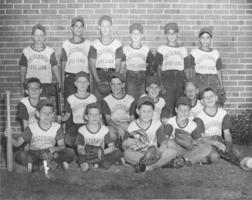 There was a Chesterbrook Market, you went into a room about the size of a small living room and there was one counter, and you asked for what you wanted and the merchant would get it for you. He had a ladder to reach items high up. There was a Coca Cola cooler that the merchant had to fill with ice every morning, and by the end of the day, the cola bottles would be floating in water.

Next door was the Esso station with a soda machine, and the children figured out how to get the colas out without paying for them – not one of the nicest things since Mr. Bray, the owner, sponsored the little league baseball team.

There was an Old Chesterbrook Market, an old fashioned store with rocking chairs and pickle barrels. In the 20’s, they had Coca Cola on the shelves. When it closed, you could still see those Coca Cola bottles sitting on the shelves through the window.

Q: Did you walk to school, Chesterbrook Elementary? Yes, it was a half mile, no sidewalk, Kirby Road was a dirt road. When Kirby Road was paved it was slightly elevated, so it was 3 or 4 steps up to the road.

Q: Was the schoolhouse the same as the original building? No, the 1906 building was made of wood. The 1950’s building was made of bricks. The photo below shows the big new wing. With the post war era, there was an explosion of students. We had to go to school in shifts. Half the kids went in the morning, and half in the afternoon, one year in the church basement. Multiple classes. 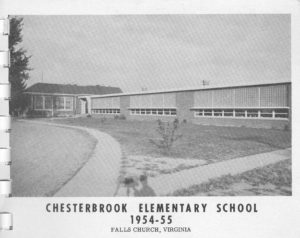 Q: What is a happy memory of your days at Chesterbrook Elementary? What about the teachers?

I had some very good teachers. Teachers in those days were devoted to teaching. I had one teacher. We had a set of three books about pioneers in our classroom, about how they went out west in their wagons. The books detailed how the pioneers made soap, how they did and made everything themselves. The teacher read a chapter a day about the pioneers. It went on all year. It was fascinating, I’ll never forget that. Nowadays, teachers have more rules and they have to be careful about what they say. I feel lucky that I grew up when teachers used their own creativity to teach the kids.

I was curious to know whether Frank was familiar with the Chesterbrook Woods neighborhood, as it would have just been being built when he was a boy. He said yes, his father remarried and the home was on Oakdale Road.

“It’s glass and steel,” remarked Frank of the present day Chesterbrook, McLean area. Frank moved away in the 1960’s. His memory of the area, what he knew, and what Chesterbrook is now, are two different worlds. His memory is fossilized and well preserved by departure. All the same, it is remarkable to hear of a Huckleberry Finn-esque time once present in McLean. Times have really changed!

To see more of Chesterbrook, Virginia from the 1950’s, visit: http://www.columbia.edu/~fdc/virginia/

Lizzy Conroy is an active and experienced Realtor® with HBC Group of Keller Williams McLean/Great Falls. She co-leads the team with Karen Briscoe. Their team of agents serve communities throughout the DC Metro Area including Northern Virginia, suburban Maryland and Washington, DC, and consider it an honor to improve and impact lives through real estate. Contact Lizzy today to discuss how she can assist with your real estate needs: www.HBCGroupKW.com, 202.441.3630, Lizzy@HBCGroupKW.com

Lizzy Conroy is a Partner of HBC Group. She has served as a real estate professional since 2009 and has worked with hundreds of clients. Lizzy graduated from Georgetown University with a B.A. in Economics and has served in a number of professional capacities in the Washington, DC area âÂ€Â“ first with the international trade group of Hogan Lovells, then as a marketing manager with MicroStrategy of McLean, VA. She also held business development positions with Kalmia Construction, a Maryland-based commercial construction company, and Newmark Knight Frank, a commercial real estate firm.
Read Full Bio