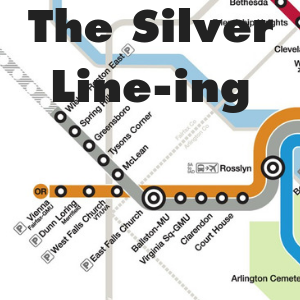 The Silver Line of the Washington DC metro is the silver lining of the Tysons area.  It will cover 23 miles and has four Metrorail stations in the Tysons area alone.  The first phase opened in July 2014 and has changed the landscape of the region.  The Tysons Partnership was formed to build community as it projects the area to double by 2050. The mission of the organization is to Build America’s Next Great City.

Prior to the Silver Line being operational, the Tysons area was almost entirely vehicle dependent.  It is currently one of the region’s most congested areas as it brings together several major highways, shopping centers which represent over 4 million square feet of space, corporation headquarters and other businesses with an employment base of over 110,000 and 26.4 million square feet of office space.  In fact Tysons is currently both Virginia and Fairfax County’s  largest office market and the 12th largest business district in the United States, about the same size as Denver!

Tysons is mid-way between Washington DC and the Washington Dulles International Airport and serves as a gateway to the Nation’s Capital and the mid-Atlantic region.  Located at the intersection of the Capital Beltway (I-495) and the Dulles Toll Road (Rte. 267), it is bisected by two other major roads:  Leesburg Pike (Route 7) and Chain Bridge Road (Route 123).  Taking some of the cars off these roadways is one of the most significant aspects of the Silver Line being the Silver Lining of Tysons!

Tysons is one of the great shopping Mecca’s of the world, boasting both Tysons Corner Center and Tysons Galleria in addition to numerous strip centers and destination shopping locations.   The major retailers include:  Macy’s, Bloomingdales, Nordstrom, Neiman Marcus, Saks Fifth Avenue, Ann Taylor, Barnes & Noble, Brooks Brothers, L.L. Bean and REI.  Further there are numerous boutiques, restaurants and clubs, hotels and entertainment venues, making it one of the most desired destinations in the region.

The area is called headquarters for a number of major corporations, including Booz Allen Hamilton, Capital One, Freddie Mac, Gannett/USA Today, Hilton Worldwide, MicroStrategy, PWC, National Automobile Association and SAIC.  The Silver Line means ease of travel between Tysons and points to the east such as the Pentagon, the downtown District of Columbia government and business areas, National Landing the HQ2 for Amazon, Reagan National Airport.  To the west the Silver Line is open to the planned community of Reston and will eventually extend to the Washington Dulles International Airport.

The Tysons Land Use Task Force has created a vision to incorporate an appropriate mix of commercial, retail, residential with the transit facilities as well as parks, open space, arts, cultural and community amenities.  According to the U.S. Census in 2010 there were 19,627 people who called Tysons home.  Planners are projecting 100,000 residents for the area.  The Silver Line is truly the silver lining for Tysons!

The best way to understand the real estate market is to work with an experienced Realtor® that is intimately familiar with the market nuances.  Karen Briscoe and Lizzy Conroy and their team of agents at HBC Group at KW would be happy to help you to sell or buy in the Northern Virginia, Washington DC and suburban Maryland areas.  Please reach out at: www.HBCGroupKW.com, 703-734-0192, Homes@HBCGroupKW.com.